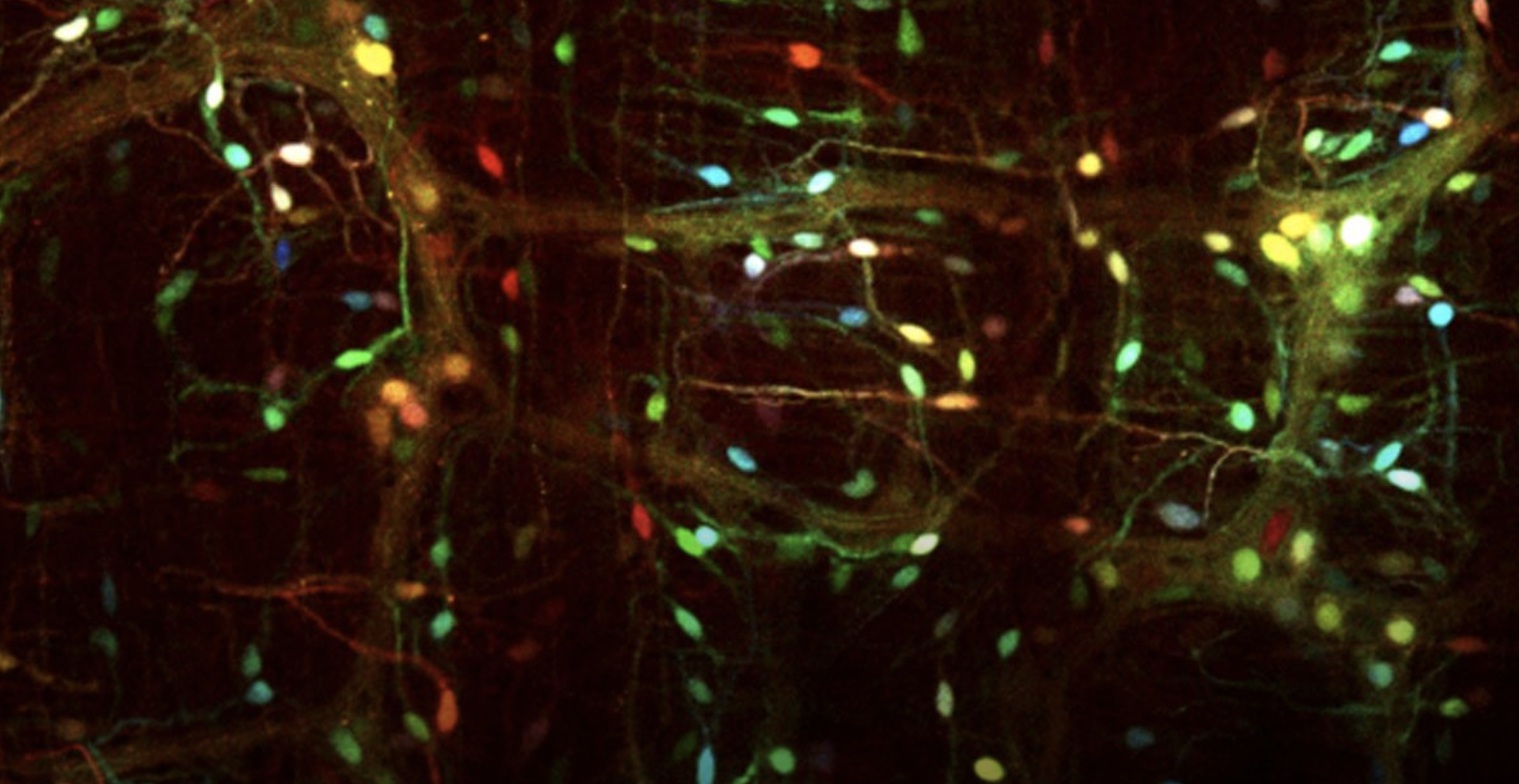 Although clinicians have long reported that Parkinson’s disease (PD) does not affect the brain alone, the field has only recently started to investigate gut dysfunction in experimental models of PD. Consequently, the anatomical and functional basis of gut-to-brain circuitry dysfunction in PD—such as network activity and dopamine signaling—remain poorly understood. As part of the Aligning Science Across Parkinson’s (ASAP) initiative, our team is characterizing circuit mechanisms underlying gut-to-brain disease spread and progression in the earliest appearance of Parkinson’s symptoms.

Our hypothesis is that environmental and genetic factors impact the connections between neurons in the enteric nervous system (ENS), which regulates the gastrointestinal tract. This disruption may increase susceptibility to PD triggers—including aggregation of alpha-synuclein, which is toxic to cells and can trigger PD symptoms and gut inflammation. This inflammation could, in turn, augment the toxic form of alpha-synuclein that circulates to the brain and causes dysfunctions in neural circuits and motor deficits.

We will determine PD-relevant gut and brain anatomic and physiologic profiles in rodents, primates, and human cells by clarifying the anatomic pathways underlying gut-to-brain propagation of aggregated alpha-synuclein in mice, and by constructing anatomic and functional maps of macaque ENS and central nervous system PD-relevant circuits at single-cell resolution. We also will test whether disruption of ENS circuitry mitigates gut-brain disease outcome and evaluate whether spiny mice (a rodent model that can repair damaged tissue) show protection from PD-related gut-brain degeneration.

Miggy received his B.S. and M.S. degrees in chemical engineering from Stanford University. Prior to joining the Gradinaru lab, Miggy developed carbon fiber electrodes designed to be used simultaneously with fMRI and optogenetics. As a graduate student in the Gradinaru lab, he is currently interested in engineering viral capsids to make novel vectors for research and therapeutic applications.

Miggy is in Biological Engineering program in the NIH/NIGMS Biotechnology Leadership Predoctoral Program in Micro/Nanomedicine at Caltech.

Nastya is a current Caltech undergraduate pursuing a BS in Bioengineering. Her previous lab experience includes work on piRNA-mediated transcriptional repression with the Aravin lab. With the Gradinaru group, Nastya studies the application of AAV technology to develop gene therapies for human neurodegenerative disorders such as Friedreich’s Ataxia and Rett Syndrome.

Pat is an incredible administrative assistant who works at lightening speed to help with everybody’s needs!

Elisha is an awesome lab manager who works tirelessly to keep the lab in good shape! What would we do without her!

Nathan received his B.S in Neuroscience at the University of California, Riverside in 2020. In the Gradinaru lab, he is excited to aide graduate students and post-doctoral scholars to manufacture, test, and study novel AAV variants.

Acacia received a B.A. in Neuroscience in 2013 from Pitzer College in Claremont, CA. In her undergraduate research, she explored a range of topics involving medical therapies, including transplantation of engineered stem cells for epilepsy and vaccine production strategies for underdeveloped countries. After graduating, she worked as a lab technician for the Shorter group at the University of Pennsylvania, investigating the role of molecular chaperones in protein folding of disease substrates. After completing the preclinical curriculum at the Keck School of Medicine of USC, she has joined the Gradinaru lab, where she is investigating gene therapy applications for diseases affecting the nervous system. Acacia is part of the USC-Caltech MD-PhD program.

CTF Postdoctoral Fellow, 2016-2020. Elliott is now a Assistant Professor in the Division of Experimental Hematology and Cancer Biology, Cincinnati Children’s Hospital Medical Center, Department of Pediatrics at the University of Cincinnati College of Medicine.

David received his B. ASc. in 2017 from the University of British Columbia in Vancouver, Canada. During his undergraduate, David worked with the iGEM teams at UBC, engineering functional cellulase enzymes to express on the surface of C. crescentus and characterizing CRISPR/Cas9 in A. tumefaciens for crop protection. Between graduation and starting his PhD, David researched the degradation of environmental toxins using a genetically engineered bacteria and developed technology to scale the production of human pluripotent stem cells in vitro. In the Gradinaru lab, he is researching the AAV capsid and the production machinery of AAV to improve the production capacity of gene therapy vectors.

Xinhong received his B.S. in Biotechnology from Tongji University, China in 2017. He studied the genetic impact on Alzheimer’s Disease using Drosophila and led a iGEM team manipulating C. elegans with Optogentics whist at college. Prior to joining Caltech as a student in Neurobiology program, he did his undergraduate thesis in Kay Tye’s lab at MIT focusing on the circuit underlying alcohol addiction. In the Gradinaru Lab, he is developing tools to study the interaction between Neuron System and Immune System.

David received his B.S. in Computer Science from the University of Michigan in 2014. Before collaborating with the Gradinaru Lab, he worked in Richard Andersen’s lab doing data analysis for single-neuron electrical recordings in implanted human subjects, and developing a framework for controlling a robotic prosthetic arm. He was a software engineer at the Jet Propulsion Laboratory in the AI group and worked on planning and decision-making algorithms for autonomous systems, and image analysis of comets. David is co-advised by Viviana Gradinaru and Matt Thomson, where he is applying automation technology to biological applications, such as machine learning for AAV targeted evolution.

Tatyana was granted her B.S. degree in Electrical Engineering from University of Michigan, Ann Arbor. Prior to joining as a graduate student in Medical Engineering, she worked at NASA’s Jet Propulsion Laboratory as a Signal Processing Engineer and volunteered at Viviana’s lab doing data analysis on AAV targeted evolution project and on image processing for light sheet fluorescence microscopy. Tatyana is co-advised by Viviana Gradinaru and Matt Thomson. In Viviana Gradinaru’s lab, she is currently working on engineering Arc capsid protein for targeted RNA trafficking with a motivation to guide development of novel delivery methods and improve existing systemic gene delivery methods.

Gerry received a B.S. in Psychology, a B.S. in Primatology and a B.S. in Cellular, Molecular and Microbial Biology, all from the University of Calgary, Canada. During his undergraduate, Gerry investigated an array of research topics: how repeated seizures change the functional organization of the motor cortex, how cell adhesion molecules are involved in the development of hypothalamic nuclei, and how nanoparticles may be used to control liposome fusion. In the Gradinaru Lab, Gerry is taking a multi-pronged approach to studying how behavioural stress impinges upon reproduction.

Xiaozhe received his BS from Tsinghua University, Bejing, China in 2014. Before joining Caltech, he was involved in multiple projects on structural biology and protein engineering. In the Gradinaru Lab, Xiaozhe is working on developing new molecular tools and viral vectors for neuroscience.

Michael received his B.S. and M.S. in Biotechnology from ETH Zurich. He completed his Master’s Thesis in the Bio Engineering Laboratory at ETH Zurich where he investigated the modulation of signaling in mammalian axons using a high-density MEA. In the Gradinaru Lab, Michael is applying optogenetics, in vivo optical imaging and electrical recordings to study neural circuits implicated in behavioral states.

Máté received his BSc and MSc in genetics and developmental biology from ELTE, Budapest, Hungary. During his studies, he worked on chromosome segregation in the mouse oocyte at the Tachibana lab, Vienna, Austria; and on DNA methylation and transposon control in the male germline at the Bourc’his lab, Paris, France. Máté did his PhD in the Torres-Padilla lab in Munich, Germany collaborating with Jop Kind’s laboratory. His work focused on 3D genome organization in the preimplantation mouse embryo. He mapped Lamina Associated Domains (LADs) genome-wide in single cells of embryos and identified epigenetic processes that could play a role in LAD formation upon fertilization. In the Gradinaru lab, Máté aims to engineer novel rAAV variants to target the germline.

Anat received her BS, MS and PhD in Physical Chemistry in The Hebrew University of Jerusalem, Israel. Her doctoral thesis, under the supervision of Prof. Yehuda Haas, focused on environmental effects on ultrafast molecular photo-induced reactions in condensed phase. She worked as a postdoctoral fellow at Yoram Ben-Shaul’s lab at The Hebrew University on discrimination between socially related cues in the accessory olfactory bulb. In the Gradinaru lab, Anat is interested in the effect of behavioral stress on reproduction, using tissue clearing, viral tracing, electrophysiology and optogenetic techniques.

CALTECH DIVISIONAL POSTDOCTORAL FELLOW
Min received her BS, MS and PhD in Bio and Brain Engineering at KAIST. Her doctoral thesis focused on developing algorithms for quantitative analysis of large-scale calcium imaging data. Before joining Caltech, she worked as a postdoctoral fellow at Korea University on developing macro-scale 3D imaging and digital reconstruction methods using tissue clearing technique. In the Gradinaru lab, Min is interested in computational approaches to reconstruct the cellular structure of cleared tissue.